PMDG have just announced that the DC-6 Cloudmaster is now in beta stages of development.  The aircraft was the first product released for X-Plane by PMDG, and soon we should have it available for FSX and Prepar3d platforms.

Robert gave the update on the status of the project on an Avsim forum post and this is some of what he had to say:

We have a ton of stuff going on behind the scenes at PMDG of late…  Simultaneous work on three different four engine airplanes.

Concurrent with our other announcement regarding the 747, tonight we wanted to let you know that we have moved the PMDG DC-6 Cloudmaster for FSX, FSX-Steam Edition and Prepar3D into beta testing!

We still have some work to accomplish here but most of it is down to fine tuning the product and bringing in additional functionality that we are really excited to tell you about.

In the mean time, I have a few images of the old girl in Prepar3D- which I think you will find is a breathtakingly great platform for such a product.  The moodiness of the lighting, the clarity, reflective textures, bump mapping and animation capabilities really bring out the nuance and detail of this absolutely fantastic simulation!

We are in the process of moving a number of features from the 747-400 into the DC-6, such as sound processing and mouse handling- and we think these will really make this four engined beast feel like a good, well worn second home for PMDG pilots! 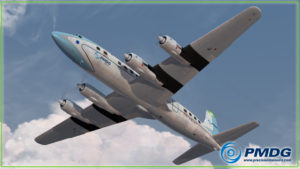 You can read the full post by clicking here. 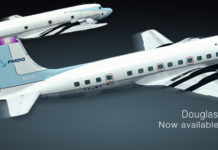