Great news for the lovers of island flying! 29Palms have announced the release date for their Samos scenery!  The scenery will be available on the 8th of July!  That is only 9 days away.  So get your planes, sunglasses and sunscreen ready for some great island flying.

In preparation for the release 29Palms have issued an image showing visualization of the approaches.  The image is shown at the bottom of this article.

Samos (/ˈseɪmɒs, ˈsæmoʊs/; Greek: Σάμος) is a Greek island in the eastern Aegean Sea, south of Chios, north of Patmos and the Dodecanese, and off the coast of Asia Minor, from which it is separated by the 1.6-kilometre (1.0 mi)-wide Mycale Strait. It is also a separate regional unit of the North Aegean region, and the only municipality of the regional unit.

The airport is named after Aristarchos of Samos, an ancient astronomer and mathematician, and lies within 5 km from the nearby town of Pythagorio. The airport features a single short runway serving both arrivals and departures. The airports surroundings leave little room for error or mistake on the behalf of the pilots – with nearby mountains and sea at the end of the short runway. There are often strong Meltemi winds blowing from the north during the summer months which further contribute to the difficulty of the landing. There is only one terminal within the airport. There are five boarding gates, none of which have jet-bridges. Passenger facilities are split across two floors and include a duty-free shop and a small café. 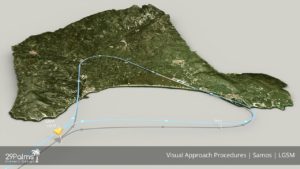 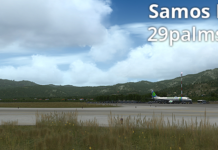 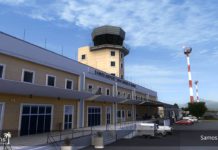 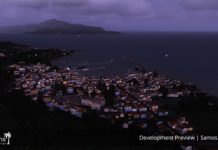