FSPassengers – an application that allows you to simulate everything from boarding passengers, to them screaming later on due to excessive turbulence is getting a facelift for the modern age.  The new version, called FSPassengers 2015 will apparently be out really soon.  Within a week perhaps.  This is according to the post made by Dan Steph, one of the programmers of the application.

FsPassengersX 2015 will be released within one week if the current beta test is going well !

The new app will work with FSX as well as FSX-SE.  It appears that FS2004 is not supported.  Prepar3d version will be coming after the 2015 edition is released:

Once done with the 2015 edition, I’ll make a Prepar3D v2 version. Watch the site at the meaning time.

Now for the best news, if you already have FSPassengers X, you will get the new version for free! If you do not have the old version then for the first 10 days you can get it for 19.95 euros, after that the price will go up to its usual price of 29.95 euros. 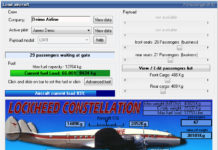